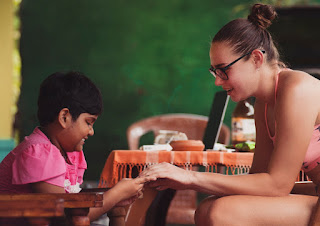 One article from Pew Research Center cited a study where in order for someone to be deemed “highly involved” in the church, it meant that they attended service on a weekly basis and attended a small group at least once a month. What was fascinating was that the same study showed that only 20% of mainline Protestants were highly active in their church. And since we can deduce that there is a correlation between involvement at the church and actually serving in the church, it’s likely that the going rate of church members who serve is hovering around the same percentage.

Talking with the youth about what service is…that’s all good. But when engaging the youth on serving in the church, maybe we should first ask the question “Why should we conduct acts of service at all?” Take a moment to compare Luke 17:7-10 to Luke 12:35-40. In the first Scripture, Jesus says that we should consider ourselves to serve because we are simply just doing what we are called to do (we are unworthy servants). However, in the second Scripture, Jesus tells the parable of a master serving His own servants when he finds them in the midst of serving. Both ideas about serving are striking, yet somewhat opposite of each other.

Why would Jesus present this paradox to His disciples when talking about the topic of service? The Bible balances on the tightrope between these two concepts because God is not looking for a transactional relationship. If Christianity was a transactional religion, then everyone would do their 10 prayers and weekly community service project and be done with it for the rest of the week.

Instead, it might help for our youth to understand that serving is more like being a part of a team. God wants us to be a part of the winning team, and being a part of such a team means that we become active and engaged servants. Just like if the student was to play on a basketball team, the expectation is that they would collect rebounds, pass the ball to their teammates, and help each other make baskets. If you don’t do these things for your teammates, then you’re not playing basketball, you’re just watching it! Likewise, being on God’s team means that we get in the game and do the things that the coach (Jesus) tells us that we need to do in order to be a part of the experience. The best thing about it is that this team for the Kingdom of God doesn’t last for only a two-hour game…it lasts for the entire span of eternity.

This blog has a focus on small groups, men's ministry, and youth ministry. Join us for the journey by subscribing and sharing this post!