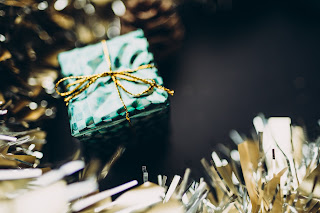 My wife and I enjoy settling in to a good TV show and taking our time to watch through a multi-season adventure that captures our hearts and our minds. One such gem we came across years ago was the well-received crime-solving TV show Monk. The successful comedy-drama detective show ran for an incredible 8 seasons. While the show may not be as binge-worthy as some others that are streaming today, it consistently delivers on laughs and lighthearted fun, right up until the end.

The show follows Adrian Monk, a Sherlock Holmes-type of detective that has an extreme case of obsessive-compulsive disorder. Even with the challenges that he faces from his OCD, he still has an incredible ability to solve every case that comes his way, except one: the murder of his wife, Trudy. It isn’t until the final episode that he solves the case, and how it comes about is fascinating. Throughout the course of the show, a Christmas gift left behind by Trudy is occasionally mentioned and discussed. In a stoic way of honoring his wife, Adrian repeatedly refuses to open the gift. However, in the show’s final two episodes, events occur that threaten Adrian’s life. Begrudgingly, he finally agrees to open the gift, only to discover that his wife actually left behind clues for her husband to find the individual who ended up murdering her.

After 8 seasons, the answer to the one case that tormented Adrian was sitting on his shelf the whole entire time. While it may have been an excellent method for the writers to be able to easily wrap up the show whenever the network decided it was time, I can’t help but wonder how different the show would have been if Monk would have just opened up the gift a few episodes in. Something that tormented Monk for so long could have been turned around and put to rest so quickly. If we knew someone like Monk in real life, surely we would have voiced our opinion to them and told them to open the gift. We may have even criticized them for waiting to open the gift. But how often do we pull an Adrian Monk and refuse to open the gift that God has so freely given to us through His Son Jesus Christ? We may think we are stoic and capable of navigating through life on our own, but it only is a matter of time before we realize we are severely under-equipped.

Romans 6:23 says “For the wages of sin is death, but the gift of God is eternal life in Christ Jesus our Lord.” We have a choice: either we set aside God’s gift of Jesus and continue to be tormented by the sins that shackle us in our lives, or we accept the indescribably incredible gift that God freely gives to us, granting us eternal life and salvation through His Son Jesus Christ. But many of us just open the lid of the gift and look inside before setting it back on the shelf. We are content that we accepted the gift and opened the lid, because at least our eternal life is secured.

What if we took the gift out of its box and actually applied it to our lives every day? What if we used it in everything we did or said, and what if we put it on display for others to see? Not only would our daily lives be dramatically altered, but the lives of those around us would also be impacted by the consistent outgrowth of our faith. Colossians 3:23-24 says “Whatever you do, work at it with all your heart, as working for the Lord, not for human masters, since you know that you will receive an inheritance from the Lord as a reward. It is the Lord Christ you are serving.”

Serving isn’t a once-and-done deal. Ask the Lord in your prayers what He has in store for you for 2020, and take the first baby step in doing it. We oftentimes marvel at Christian athletes, business moguls, and successful leaders and call them lucky or favorably blessed, but the reality is that they were consistent with applying the Lord to their lives on a daily basis. In James 5:11, the Bible makes note of this in the area of suffering that perseverance allows us to see what the Lord has a desire to bring about in our lives. Let us keep this principle in mind as we forge ahead in the New Year and pursue the Lord with all of our hearts!

This blog has a focus on small groups, men's ministry, and youth ministry. Join us for the journey by subscribing and sharing this post!
Posted by Sean Buono at 10:36 AM